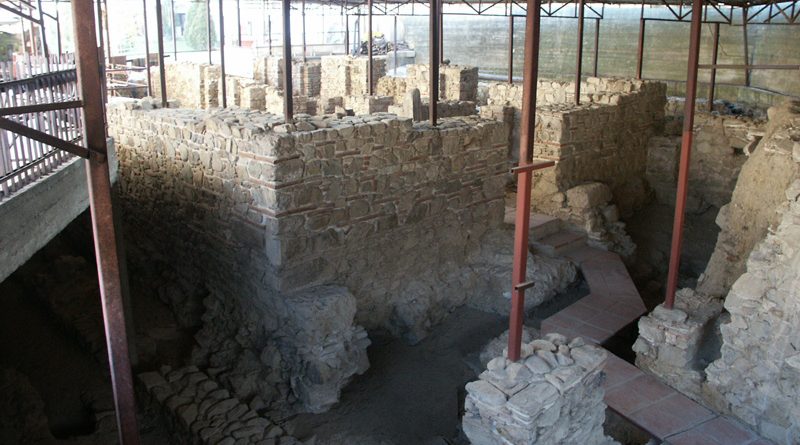 The locality known as “Holly Fifteen Tiveriopolian Hyeromartyrs” in Strumica consists of the remains of the medieval church built on the foundations of the late antique basilica found in archaeological excavations in multiple campaigns. During the 1970s of the 20th century a new church and dormitory around the complex were constructed.

The oldest building in the locality is the late antique basilica, probably constructed in the middle of the 5th century. There is some debris from the basilica that primarily reflects  the abundance of marble used in architecture, some of it as decorations embedded in the medieval church, and some in the remains of the north vestibule. The most remarkable are the remains of a mosaic floor found almost everywhere under the foundations of the medieval church. We should mention, too, the remains of dozens of vaulted tombs, the most conspicuous one being the central tomb with the group portrait “Holly Fifteen Tiveriopolis Hyeromartyrs”.

Most likely in the 11th-12th century, another cross-shaped church was built on the foundations of the basilica which doesn’t follow the walls of the basilica. It was placed on the south, occupying the central nave of the basilica and it has narthex and exonarthex on the west side. The church was built in the technique opus klauzone, and many building materials from the older buildings were used as decorations in the walls. In the apse of the church is a crypt – reliquary built in the shape of a cross, which kept the relics of saints.

Reinforcing the cult of saints “Holly Fifteen Tiveriopolian Hyeromartyrs” was challenged with the discovery of the relics of the five martyrs: Timothy, Komasy, Eusebius, Socrates and Theodore in the second half of the 9th century. Even the very Biography of Theophylact explains the fate of the relics of Martyr Peter, whose arm was taken to Thessaloniki as a healing relic and placed it in the temple dedicated to Anastasia.

As already mentioned, some of the remains were transferred and deposited in custom built cross-shaped church crypt, at the right of the altar of the newly built cathedral in Bregalnitsa. The two churches dedicated to “Holly Fifteen Martyrs of Tiveriopolis” in Strumica and Bregalnitsa grew in significant Slavic spiritual and educational centres.