The Pied Mosque is one of the most magnificent pieces of Islamic high architecture in the Balkans, and other local landmarks of Ottoman heritage which include the Turkish Bath (“Hamam”), The Teqe “Harabati Baba”, and the Aristocratic residence of the Pasha.

This exquisite architectural monument situated on the right of the Pena river bank, stands today in its functional form and is still in use for daily religious purposes. It is regarded as one of the most treasured religious icons of Moslem population in Macedonia. The Pied Mosque is a medieval early Istambulian baro – que style building believed to be realized in a typical local form of original paintings on both the exterior as well as the interior of the Mosque walls. Its artwork is produced by local artists whose skills have been acquired from both major European centers of culture like Padova, Florence and Venice, as well as eastern centers of culture and civilization such as Istanbul, Cairo, Bagdad, Damascus and others. The original building was built in 1495 and it was further improved in 1564 by the Pasha’s two daughters Hoorshide and Mensoureh, who have disposed of their family wealth  to add further details to it, such as their own Mausoleum (“tylbeh”, the Toomb), a water well (“sehyah”, three-way, Persian) and luscious painted decorations on the walls of the Mosque. The Tomb (“tylbeh”) is an imposing octagon of Stone masonry that is built of a type of porous sandstone in a delicate and precise manner with refined edges and prominent Islamic broken arches at the top of the windows, cove red on top by two layers of cascading roof tiles. The Water well is a tall cubed stone feature that has water taps on its major sides containing drainage pools under them. Its integral parts have two functions: supplying water for prayer absolutions and providing a water source for the local population and the passersby.

It is believed that the Pied Mosque suffered major damage during its more recent history, and was finally rebuilt and decorated in the existing form by Rexhep Pasha and Abdurrahman Pasha his son and successor, who were benefactors of Tetovo and lovers of Art and Culture. The External facade has been given a marble like effect that is painted in boxed features in different subsequent colors and star like, floral and different geometric features placed in its centre revealing thus the main clue of the Mosque’s name. The interior of the central praying hall is painted in an exuberant array of motifs, colors and geometric compositions. Placed in edges, we find motifs following the borders of different sections inter – blending with central spaces, depicting different floral bouquets, geometric shapes, grapevines, arabesque impressions and religious inscriptions, as well as the mention of major prophets throughout the progress of Faith dating from the prophets Abraham, David, Moses, Jesus, Solomon etc, which can be found in circular tokens around the upper mid-belt of the interior. Just below the inner coving we can find prominent cities representing the progress of the Ottoman Empire. The most intricate and treasured painting on its walls is the much cherished image of Mecca, on the right side of the Minbaar, including golden color, as well as colors in different earthy hues and nuances. It’s said that the presence of different shapes and colors may contain a sense of rhythm and dynamics, which makes the observer want to indulge in the surrounding visual feast with a continuous sense of a consecrated spiritual awe. 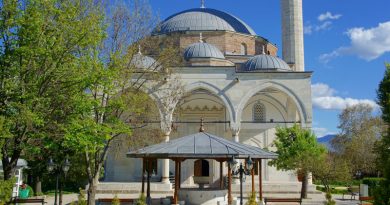 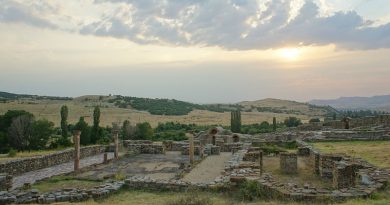 Karpos: the Untameable Will for Freedom